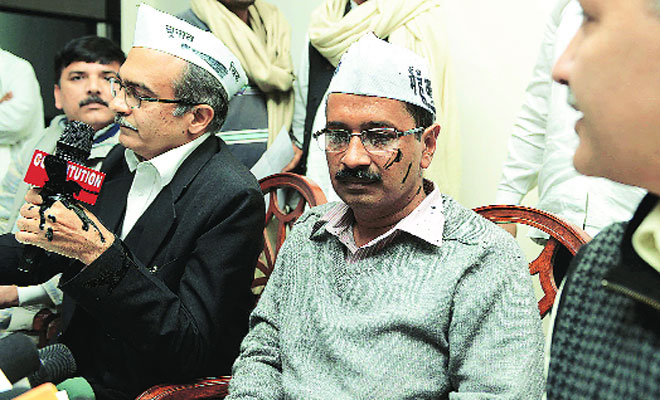 Ask anyone from the urban middle class in India (sans Delhi) about how their political preferences evolved (chronology samjhiye), and they’ll probably tell you a story about how they once supported Kejriwal before he ‘sold out’. I too was one of those people. After a while though, I started to question this universal truth we all seem to have accepted. We seemed to be judging Kejriwal by a different standard than other politicians who can break promises at will and suffer no long-term credibility loss. Of course, the easy answer is that expectations were higher, but I don’t buy that. People had expectations about India becoming a superpower by 2020 and 15 lakhs in their account too, but falling short of lofty expectations wasn’t a high crime in those cases.

What explains this dichotomy, I wondered. One possible answer is that Kejriwal was a mortal hero. He was slapped multiple times, had ink splashed on his face on live TV, did stupid things like resigning without consulting the people, sharing a dias with Lalu Prasad Yadav and then most damning of all, he apologized multiple times for mistakes, giving conclusive proof of his fallibility. In short, we wanted a God and he just wasn’t. Legendary heroes don’t get slapped in public, not once but twice.

On the other hand, we had invincible, infallible heroes. Hriday Samrats and Chanakyas. Heroes who proved that our ancestors possessed the nobility and grace worthy of their esteemed progeny. Sometimes these Hriday Samrats had to fight against their own kin, or fight unarmed men, but it was all part of their dharmic duty to restore balance in the universe, of which India is the center of course. In this, they weren’t different from a certain hero from the Mahabharata, who was initially reluctant to fight but had to, for the greater good.

How could the infinitely fallible Kejriwal, who admitted to have diabetes and grew a little portly because he didn’t practice yoga compete against such infallible legends?

Only, he did. He resigned, went national prematurely, lost pathetically and then went back to the people with an apology. He won 67/70 the second time around but spent half the time on dharnas again. He fought with the governor, called respected opponents psychopaths, tweeted incessantly and generally irritated a lot of people who said he is a protester and can’t govern for his life. He made laughable promises of free water and electricity which were impossible to pay for. He made metro rides free for women. But after all the jokes were done, not only did he do all that, the Delhi government ended up having surplus revenue over the last 5 years in spite of lower grants from the central government. Education’s share in the budget was increased to 26% while the total budget increased by 19.5%. Objectively, things have gone well and people on the ground are happy with improvements in education, healthcare, water and electricity. Even pollution hasn’t gone up, although admittedly a weak area in terms of performance.

On the other hand, the country’s promised Achhe Din never came. GDP growth went down and unemployment went up. Of course, we were told that we should hold on to our faith more when it is being tested, and how that’s our little contribution to nation building. In matters of faith, as we all know but deny, results do not matter. If we pray for the good health of someone in the family and they get worse, do we stop praying? Of course not, that is the time to pray harder. Moreover, it is known through Whatsapp university that the state of the country is very similar to a patient undergoing treatment for cancer. Just like a patient has to suffer through chemotherapy before getting cured and jumping back to their feet, we too have to endure some trials and tribulations as black money is taken out of the economy and tumors that have been growing for 70 years are being cauterised. True Indians should understand and make sacrifices for Bharat Mata.

Why then is there such fear of Kejriwal, especially when he is being extremely careful not to oppose the Hriday Samrats too much or indulge in any name calling like before? Why have 200 MPs and a home minister gone to campaign against him in an election he is very likely to win? Why go after him when in comparison, other parties and a certain Shehzada has been much more outspoken in their criticism? Could it be because of a nagging worry that the answer to hyper-nationalistic, faith-based politics might turn out to be the mundane ‘bijli, pani, shiksha’ chant? The problem with all other opposition parties is that they are fighting an ideological, spiritual battle using other, diminished ideologies which have no chance at winning. The left cannot fight the right, period. Attempting to only adds to their strength. Appeals to secularism cannot defeat songs about the glory and superiority of our ancestors. But bijli, pani matters to everyone, even if their ancestors had invented bijli 10,000 years ago. It’s not as glamorous or mythical, but hunger can blunt the strongest of ideologies, and at some point people might start rooting for the person feeding their bellies rather than their egos.

Kejriwal seems to have understood this, and to be fair, it’s not just an election gimmick – they have done work for the past 5 years. Kejriwal, the ink-stained, seems to have learned how to use the right messaging to play to his strengths. Cynics will say its all Prashant Kishore’s advice, or that even taking Prashant Kishore’s advice and services is a sign of hypocrisy, but to me it is a sign that Kejriwal is learning, maturing and becoming much more effective. His interviews and town halls have been masterful. When asked about CAA/NRC, he explains his opposition to it pretty clearly, but he makes an important distinction in how he opposes it. He paints it as an inconsequential distraction and goes back to bijli, pani, unlike the rest of the opposition who talks about it only as a moral issue, which doesn’t work well because their credibility is staked on being slightly less evil and more shameless than ideological in comparison to the party in power. Kejriwal is the only politician who is successfully reframing the conversation. Watch this ‘town-hall’ debate he had with a completely biased anchor for a masterclass in framing. The anchor continuously tries to drag the conversation to Shaheen Bagh and the plight of Hindus, Sikhs, Jains, Christians in Pakistan and Kejriwal wrests it right back and reframes patriotism as something related to bijli, pani, shiksha in India, not Pakistan. The fact that he can do this is worth sitting up and taking notice of, especially when it was on a hostile channel that was showing captions that seemed to be subtitles from the script they had originally intended to follow before it took a turn for the worse. It’s worthwhile to see the whole video, to see how he goes from timid and humble for the first 20 minutes to delivering this rousing speech midway, leaving the anchor flummoxed and worrying about his annual bonus. This stunning progression shows how Kejriwal has matured and evolved and possibly mellowed down, but has just as much fire in his belly as when he started out. If I was in the BJP, I would be worried about this transformation and what else he is capable of in the future.

Nature abhors a vacuum, and I believe AAP is the party to fill it in our current political landscape. There is no space left for outward exhibitions of alternate ideologies. Maybe there will be some day, but we will only get there after the gap between the rising right and the weakened left is bridged by a new center, one that can blunt all ideologies with work on the ground. It will take time for skepticism to override faith, but human beings are quite capable of contradictory beliefs and cognitive dissonance. One day, they might go back to looking for practical benefits in real life and relegating ideology and religion to the spiritual plane and not politics. This is exactly what the ruling party would be afraid of, and why Kejriwal must win in Delhi, if just to show the rest of us that it is possible to fight myths with reality.

On a different note, out of curiosity I googled what happened to the men who threw ink on Kejriwal back in the day and found this: https://timesofindia.indiatimes.com/news/Man-who-threw-ink-at-Kejriwal-joins-AAP/articleshow/33206770.cms

Published by The Apathetic Indian

View all posts by The Apathetic Indian