Science fiction, a genre that was once considered to be just a source of comfort and imaginary friendships for the earlier despised and now celebrated human sub-species known as nerds. I’m not sure exactly when nerds became cool. Maybe when guys who looked like they will never get laid started making million dollar companies from their garages. I personally think Hugh Jackman definitely played a role by making comic book superheroes seem cool, unlike the kids who read the comics before they were made into movies. I was personally unaffected by the anti nerd mentality of the time because of my remarkable lack of respect for academic achievement, but even my friends thought my taste in movies and books was kind of weird.

Nowadays though, superhero movies, Star Trek movies, Star Wars movies are all accepted and mainstream. The big money of course brought bigger on screen explosions and hotter actresses. But there was a time before people got to ogle Megan Fox in a movie about space robots that look like sports cars. In the pilot of the original Star Trek series (which I saw recently on a dull Sunday), a beauty who was stranded on Talos IV did an utterly cringe worthy dance in green paint, which was apparently supposed to be seductive. 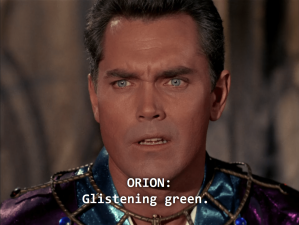 And yet, there were sci-fi fans even back then. Even now, there are movies which do not have enough action or sex or drama to sell a lot but still get a flock of devotees. What then is the true allure of science fiction books or movies apart from entertainment value, which works universally?

An article I read recently made a distinction between science fiction and fantasy which made me think about this. It argues that true science fiction according to authors of that genre takes up a big scientific advancement or discovery and uses that as a lens to examine the true nature of things we are already used to. Fantasy stories on the other hand merely sets the story in a fantasy world which might or might not be a futuristic one. The key difference is that the science or tech in that is not integral to the story. The article argues that Star Wars is a space fantasy movie and not a science fiction movie, although I think that will be debated to the end of the world and back through a time loop. Leaving aside the debate about which movies qualify, lets focus on the idea that science fiction is a premise to look at our own world and lives.

mild spoilers for Blade Runner 2049 and Her ahead

If you think about it, a story about space travel examines what home really means, a story about intelligent androids or operating systems examines what it means to be a person. ‘Do Androids dream of electric sheep?’, the book on which the original Blade Runner movie was based on hints at such a question in the title itself. The 2013 ‘Her’ explores whether the love of a AI being towards a human is real if it doesn’t fit any of the conventional ideas of what love is. Good science fiction movies or books show you what the world could be and makes you wonder what it really is now. In that process, I believe we learn how to be better people in our everyday lives, and to adapt to paradigm shifts that will make the gap between our generation and future ones even more vast than what came before. We can understand prejudices we hold that haven’t been given a name yet.

I can already think of one such prejudice after seeing ‘Blade Runner 2049’ and ‘Her’ (to my shame, I saw it yesterday). Is something real if we designed it to have certain emotions or desires? If you created an operating system or virtual assistant to love you and be who you want, is it real? Do we still refer to it as an ‘it’? In Blade Runner, K loses his AI girlfriend Joi and later sees an ad for the Joi program whispering some of the same lines his Joi told him and claims to be ‘everything you wish for’ and ‘everything you want to hear’. If someone or something was designed to be everything you need to be and tell you everything you need to hear, that’s definitely not real right and is just an act right? That was my first thought too, only Joi and her love seemed so real. If I hadn’t seen it, I probably would have said she’s not real. But she seemed so real when she spoke, or cried…In another scene, K sees Deckard’s dog (animals are extinct or nearly extinct on future earth in the movie) and he asks ‘is he real?’. Deckard says ‘ask him’ and all of us in the audience laughed at the classic Harrison Ford cockiness. But later I realized, that was the idea being explored in the whole movie- isn’t something real if it thinks it is? How else would you know? Maybe that’s the best test there is? If this sounds like metaphysical crap to you, think about dogs. If you have ever had a dog, you would definitely say its love for you is real right? Yet, dogs are kind of like that because we bred them to be so. I think the jury’s still out on whether wolves were originally domesticated by men or if they started domesticating themselves because friendlier wolves ventured closer to human settlements, managed to feed better and passed on the trait to their offspring, but at some points humans definitely stepped in. The reason we have some breeds which are better suited to be protective guard dogs and some to be rescue or sled dogs is that we chose the ones that showed that trait and crossed them to get more of that trait. We manipulated their genetics over generations to make hearing ‘who’s a good boy’ the biggest need in their lives. Isn’t that as fake and unreal as Joi’s love for K? Wasn’t it designed, fast or slow? Or is it as real as any of us who evolved to eat and reproduce and love and care?

Notice how a story about an imaginary future world with intelligent AI led to a conversation about whether you and Bruno, your childhood pooch are real? Is Pinocchio a real boy? Are you a real boy? or girl? Am I really having a conversation here or am I talking to myself? Does it matter? I think it does. I now think anything that considers itself real is real, and that every other attempt at defining it is probably pure hypocrisy. I have science fiction movies and books to thank for that.

So why do we like science fiction? Because it helps us dream of things that haven’t come to pass and never may, but helps us wonder, which just might help us stay relevant in an ever-changing world.